Custom Search
Best Dive Movies
Best Dive Photos
Best Dive Sites
Free Subscribe
, if you would like to give Greatest Dive Sites permission, only by request, to upload dive items to your FaceBook account and visa versa.

One of the best and most popular wreck dives in Croatia is the 89 meter long Baron Gautsch.

The most popular and best known wrecks in probably all of Croatia is the Baron Gautsch. This 89 meter long and 11 meter wide Austrian traveling ship was built at the beginning of the 19th century, sunk not many years later by hitting a mine on August 23rd 1914. It was transporting members of the families of Austrian officers on the line Boka Kotorska - Mali Lošinj -Trieste. Wishing to shorten traveling time, the ship had tried to come through the mine field, which is 9NM away from Rovinj. Supposedly, they had seen a merchant vessel doing the same thing. But, it struck the mine in the middle of its port and sank in a short time. The ship is protected by the Ministry of Culture in Republic of Croatia. Entering the ship is only allowed through the first two boards, because of safety reasons. The Baron Gautsch is sitting in an upright position, very well preserved and it gives unforgettable pleasure to divers all around the world. 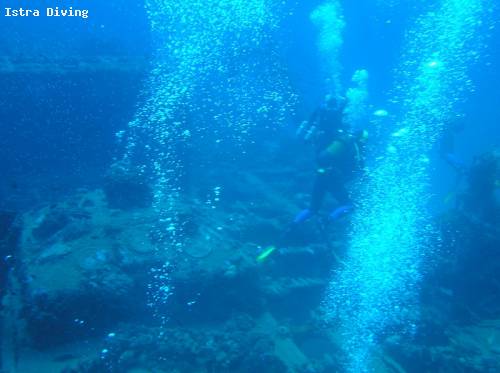 Visit our partners! Or become one.

Take a look at all the pictures!

Take a look at some of the other dive destinations.